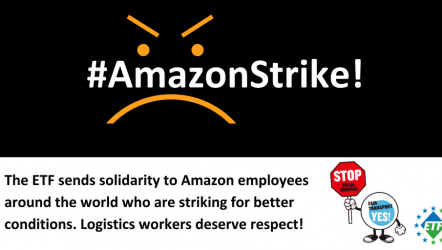 Amazon employees from Spain, Germany and Poland are sending out a clear message: the booming profits of the online retailing company should not come at the expense of workers’ safety, health and living standards.

On the very occasion of Amazon’s major summer sales event called “Prime Day”, 98 percent of employees at the company’s biggest logistics centre in Spain are on strike. Fair wages are at the heart of workers’ demands. According to spokespersons of the CCOO trade union, it is unacceptable that Amazon wants to increase wages by a margin that does not cover the cost of inflation. Allowances for night work and pay for overtime are also under threat.

In response to the Spanish action, ver.di services union in Germany is calling a one-day strike to back its demands for healthy working conditions. Meanwhile, Polish workers are staging a work-to-rule, a highly symbolic action that underlines just how much daily practices at Amazon warehouses diverge from the official working rules.

The inhuman working conditions at Amazon have attracted worldwide criticism. Undercover work at British facilities of the online retailer have revealed a catalogue of abuses, ranging from unattainable targets and restricted toilet breaks to exhausted workers collapsing at their work stations. Giant companies like Amazon carry a tremendous responsibility for impeding the drive towards fair working conditions in the logistics sector. But as the recent wave of industrial action shows, upholding the status quo is simply unacceptable.