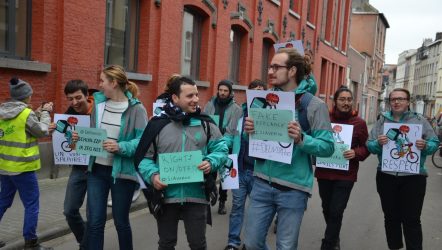 Today the court in Amsterdam ruled in two lawsuits filed by trade union FNV against food delivery company Deliveroo. The judge upheld the FNV’s claims in both cases.

The union filed a lawsuit against Deliveroo because the company engaged in bogus self-employed. In 2018, the company decided that all couriers had to become become freelancers if they wanted to continue working for Deliveroo. The couriers and their union FNV thereupon took action to stop this. “Delivery staff are not entrepreneurs”, says FNV spokespoerson Willem Dijkhuizen. “And if they are not entrepreneurs then they are employees, because those are the only two options we have”.

The court takes this into account and judges that “the nature of the work and the legal relationship between the parties since the beginning of 2018 has not changed in such a way that it is no longer possible to perform work on the basis of an employment contract. When work is done, there is without question a relationship of authority. As a result of technological possibilities, there is admittedly a great deal of freedom with regard to the availability of labour, but this still fits within the character of the employment contract, even if the working schedule is determined by the employee. The dependence on Deliveroo is still considered more important than the independence of the deliveryman.”

Dijkhuizen is pleased with the court ruling: “The judge now concludes that Deliveroo workers are not independent entrepreneurs. This means they can now claim an employment contract.”

Deliveroo sentenced to comply with CBA

The court’s explanation regarding the personal obligation to perform work and the relationship of authority in relation to the operation of the app touches upon the discussion about other platforms. The argumentation of the judge is very important for workers who find themselves in a similar position. This court victory for the FNV is therefore a welcome boost to our fight to secure fair wages and working conditions for workers across the platform economy.