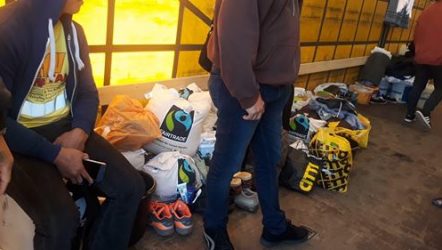 Coordinated action between transport unions in Denmark and the Netherlands has revealed the exploitation of Filipino truck drivers on European roads. With union help, the police managed to bring nine drivers to safety. They now have formal status as victims of human trafficking and are under the protection of the Dutch authorities.

Last week, Fagbladet 3F published a shocking story about the mistreatment of Filipino drivers in Denmark. Exploiting loopholes in EU rules, irresponsible employers bring drivers to Europe from Manila to work for appallingly low wages (1060 USD per month). They also face constant insults, abuse and dehumanising treatment. In between cargo runs, they are housed in terrible conditions and cannot even leave their job because their contracts oblige them to pay very high penalties if they do.

Thanks to the intervention of Dutch trade union FNV, nine Filipinos working for companies related to Kurt Beier were rescued by Dutch authorities. This has been possible because FNV and its partners have “been investigating for some time the conditions of drivers working for this company all around Europe.” as Edwin Atema, research enforcement officer at FNV-VNB, stated.

Even if Kurt Beier’s director, Karsten Beier, believes that the drivers’ conditions are “reasonable”, the company is now accused of exploitation. Why? Drivers are always forced to break driving and rest rules, they have no medical insurance, payslips or social security, and last but not least they are forced to live in abject slums.